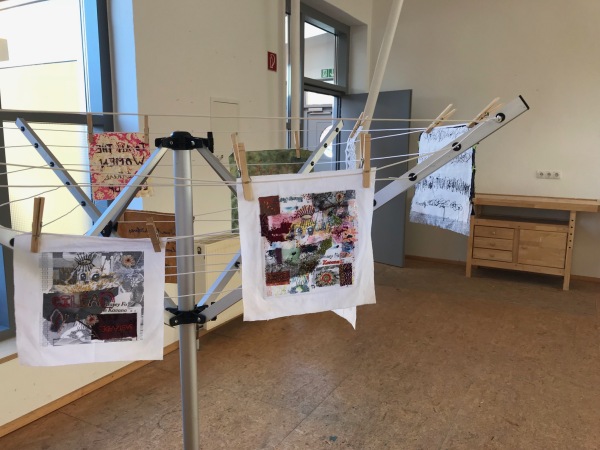 A couple of days ago, I got to test-run my vision for displaying my embroidery installation, “Dancing with the Devil.” I’ve been hard at work finishing a few last text-based pieces for it. I was inspired by Oxford dictionary’s announcement of the 2018 “Word of the Year,” which, unsurprisingly, and completely apropos to my project, is “toxic.” Runners up include “gaslighting,” and “techlash.”

This project is an examination of my own media habits, from the American news I ceaselessly read on my phone, to the arguments on Facebook about guns, abortion, racism, antisemitism, Donald Trump’s tweets, and everything else igniting the online world among Americans right now. It is also an attempt to “collage” this exposure.

By combining language and images filtered from the online media I consume, I am calling attention to the statements my brain grabs onto and refuses to release. I am asking the viewer to consider these pieces in a context outside of the media. 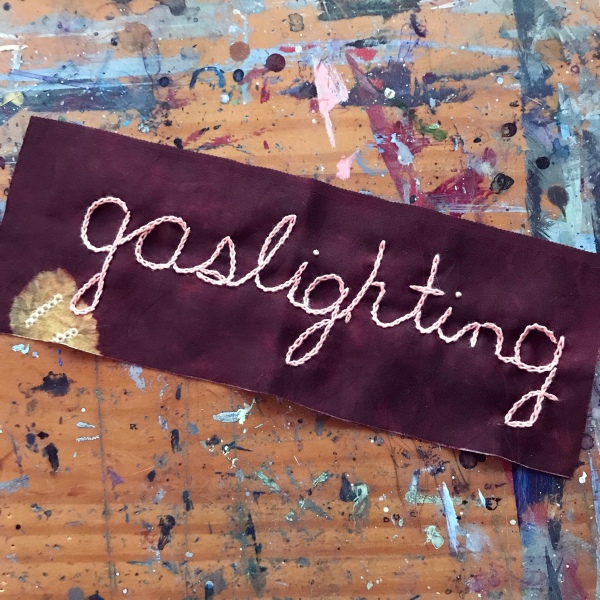 To display the work, I chose to use a rotary drying rack in the tradition of Marcel Duchamp’s “Readymades” but also thinking about the connotations of the term “cycle” to describe the news and the idea of laundry. In that sense, I am cleaning these ideas up and cleansing myself of the anxiety and toxicity I develop from engaging with all this on social media and news sites.

My main artistic influences in this project are Barbara Kruger and Jenny Holzer. I have also been influenced by the many feminist artists who, since the 1970s, have used embroidery to disrupt narratives, including Judy Chicago and others.

The use of embroidery in conceptual and political art is in itself a statement because it challenges the traditional gender roles associated with what was considered a “lesser,” “feminine” craft. However, as Roszika Parker states in The Subversive Stitch, “Quiet strength need not be mistaken for useless vulnerability.” For me, the choice to use embroidery is also about slowing the process of digesting all this news down. It is a reaction against the fast torrent of information coming at us all the time, especially with regards to the political turmoil in the United States since our 2016 presidential election.

I will be showing this work and some abstract mixed media pieces in our upcoming one-night-only show, “Schsch” at Stadtteilwerkstatt ASZ (Pfaffstrasse 3, 67655 Kaiserslautern) on 1 December. The fun begins at 6:30 pm!