I recently came across the title of a book, Women Who Run With the Wolves: Myths and Stories of the Wild Woman Archetype, by Clarissa Pinkola Estés. I was intrigued by the title, but after reading the intro and first chapter, as well as a few goodreads reviews, I decided it probably wasn’t for me. It seemed a little fanciful and hippy. Also, it relied on romanticism of an animal which has been fetishized and also demonized too much through history. I do get that we are dealing with archetypes, of course, but in my experience, archetypes are generally only useful to describe belief systems and not what is really TRUE about people.

But it got me thinking about my own womanhood, which I don’t think about much except when I’m confronted with society’s expectations of women. I walk around just being me until I’m smacked in the face with a sexist comment or a magazine ad telling me how I’m supposed to look, dress, and smell. Also, when I’m confronted with the baby question. (Do you have kids? When will you have kids? Why don’t you have kids? ad nausea). Apparently, according to Doctor Estés, a big part of her inner wolf/wild woman has to do with being a mother. Maybe that’s why I was immediately skeptical. And I started to think about the wolf as a loaded concept and whether it could be available to anyone living in the contemporary climate when there is so much cynicism, as well as so much separation between human beings and nature, including our own natures.

On the other hand, there is something fierce happening right now with women. Women are fighting back against all these forces. My inner wolf is definitely awakened by stories like this one, that much is true.

So this image of a half-formed, mysterious wolf began to form in my mind. First, in india ink:

I loved how the ink pooled and bled giving suggested form to the silhouette of the wolf. I also added some embroidery details.

Then, I thought I’d make a larger painting. I had been experimenting with my fluid acrylics and acrylic inks on cradled watercolor board. so I began to use that as a background: 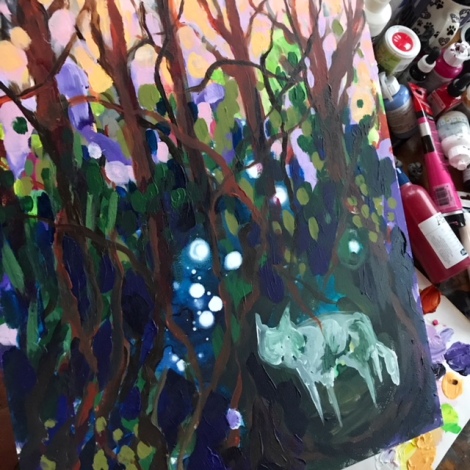 It went through a couple of phases where I loved it, and then there was just too much paint to work anymore and the forest started to look like a jungle and I HATED it! I set it aside, feeling pretty frustrated.

It’s these moments that are the hardest when it comes to painting. The realization that something you’ve made is ruined and can’t be saved. The self-doubt that follows. Really, it’s like going through stages of grief, to include anger, bargaining, and then acceptance.

I decided to begin again. Because I think, if an image is important to you, you should try again and again until you can figure out how to get it right.

So, for this third painting, I started completely fresh, keeping in mind what I had learned through the process of failure. Most importantly, I knew what effects I needed to add and then preserve through the layers. I wanted the painting to look like the ghostly time just after dawn when the shadows are weird but golden sunlight and haze is showing through the trees. In this setting, it’s as if the wolf were a trick of the eyes and mind.

Here’s the painting so far:

To be honest, I’m a little afraid to touch it right now. I like it the way it is. I would just like to add a few hints at tree trunks and leaves. However, I’m afraid this second piece will be ruined too. The only thing for it is to tread carefully.

Not sure what this all says about my connection to my “inner wild woman,” except that she is quite elusive. I know she’s there, though, sometimes.