So, I’m still on a high from our trip to Berlin over the long weekend. The most amazing part? This street art tour and workshop. I found it doing a simple Google search and clearly it was a steal so I booked it right away and could barely sleep I was so excited about it…. because I am just that much of an art nerd!

I don’t know what I expected from our guide, but I was pleasantly surprised to learn that Rob (not his street moniker) was an experienced graffiti artist who got his start in Perth, Australia before spending the last four years in Berlin. He had a deep knowledge of the history of street art and graffiti in an international context and an insider’s knowledge of the Berlin scene. We jumped from neighborhood to neighborhood, via train and bus, to see all the best and most interesting pieces.

It was interesting to me that I had already seen most of these online, just as I have seen just about every piece by Banksy, but never in person. Street art, above all other media, seems to straddle the line between personal, hand-created art and digital art because it depends on digital dissemination for its audience. And truly, I was amazed by some of the work we saw. I still maintain that seeing an artwork in person is by far the best way to experience it.

This building shows some of the more daring methods used to create graffiti, namely, either dangling upside down over the side of the building or repelling down the side, spray-painting as you go. 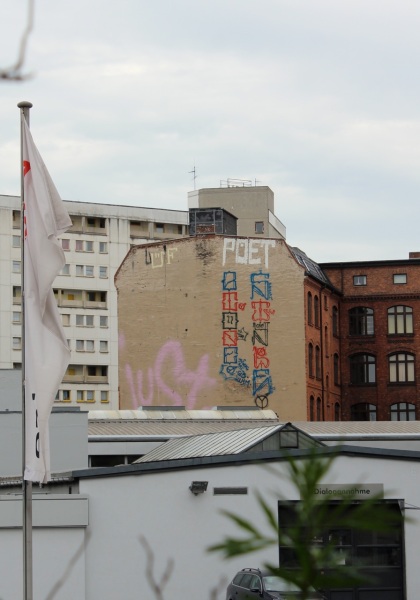 But my favorite pieces show not just conquest of heights, but true artistic skill and imagination. This piece, by ROA, depicts species that were once native to the area of Berlin but have now vanished. He painted this entire piece free-hand from a cherry-picker.

This piece by Os Gemeos (the Twins) is in a neighborhood where many immigrants live and seems to depict a man who is possibly of Middle Eastern or North African descent. One of the first things I noticed about this was how different his two hands are, especially with a shortened fingernail on the left and a longer middle finger on the right hand.

This was the newest piece we saw, by Alice Pasquini. It is a charming and beautifully- painted series of sketches from her sketchbook. I like how she has taken a simple subject – a friend’s casual portrait – and turned it into something so sweeping and permanent.

If you have people in your life who are less inclined to view graffiti as art, you might want to take them on this tour. I’ve had a number of conversations with my husband, a former police officer, about whether various kinds of graffiti are legitimate or ethical. This tour gave us both a lot to think about. I think it’s interesting that the Berlin police have only 35 people devoted to combatting graffiti and tends to view it as a non-harmful crime. When people are caught, they are often only subject to a rather minimal fine. In my view, that looks a little like tacit endorsement. Berlin officials must be aware that street art and the graffiti on the Berlin wall are a huge part of the history and character that draws tourists to the city to begin with. So, they are reluctant to quash it as long as property owners refrain from pressing charges, which is the case most of the time.

After the tour, Rob took us back to the Black Market Collective in an old factory in former East Berlin where we, in his words, got to “create badass street art” of our own.

Step one: cut out the stencil. 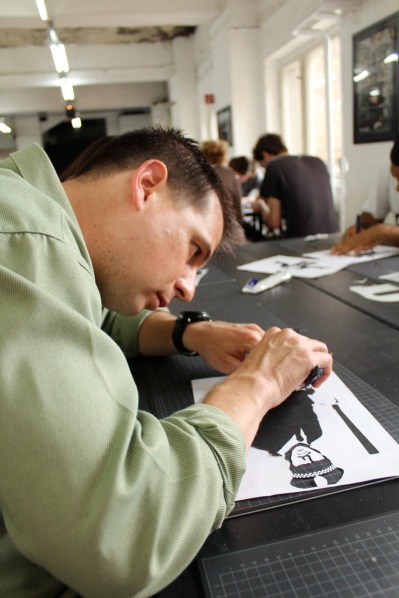 Step two: Spray paint the background. For this, we learned about a number of techniques including how to create a fade of one color into another and using various household objects to stencil graphic shapes into the background. Mike used a piece of a floral-patterned doormat.

Since I was doing a picture of Spock, I created a fade and then used a hanger to stencil in the oval shapes in purple and green. It ended up looking like a strange, space- agey honeycomb pattern. 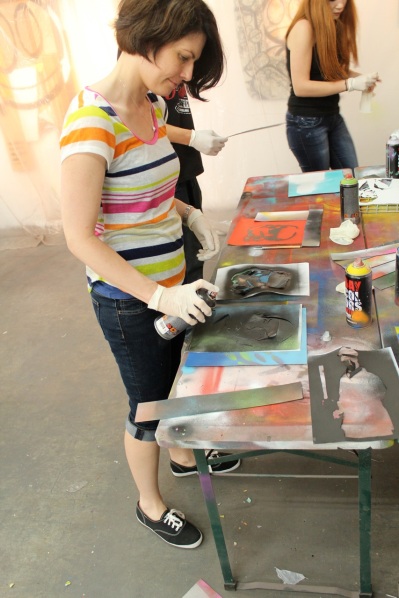 I just love what Mike chose — a British cop with a baton in front of a psychedelic background. It actually says a lot about my husband, who is just as much of a paradox!

Step Three: Rob showed me how to create some star shapes in the background using different methods. One was to simply splatter paint to create galaxies. The other was to press the can cap down upside down in a short spurt to make a comet. 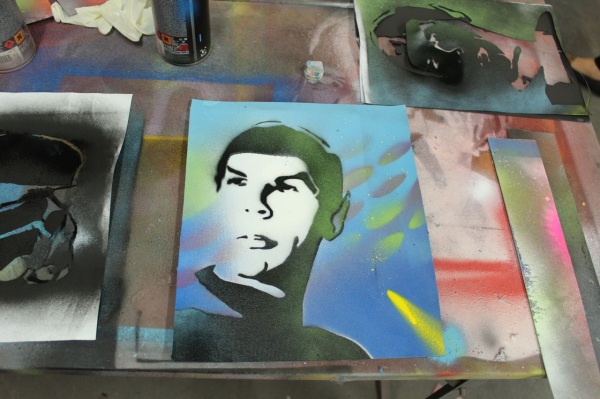 This was my favorite part of our trip to Berlin by far. I mean, how often do you get to create your own piece of original art to take home as a souvenir? And now that I feel more comfortable using spray paint, I’m seriously considering using it in some of my new paintings…. stay tuned for that!