Greetings and Happy Belated Veterans Day to all! My husband and I spent part of the long weekend in Karlsruhe, Germany, an overlooked, non-touristy gem to the south. We decided on Karlsruhe because of two world class museums there.

Karlsruhe is nicknamed the “fan city” because of the fan-shaped, radial arrangement of streets surrounding its eighteenth-century palace. The city itself is very young by German standards. It was founded in 1715 by Karl Wilhelm, who built the palace in the style of Versailles and conceived of the layout of the city, which is just beautiful in its symmetry and order.

The palace was completely gutted by World War II bombs but has since been refashioned as a museum displaying jaw-dropping treasures. The museum is definitely worth seeing, full of fine objects such as intricately fashioned wood furniture, china, and all kinds of Wunderkammer curiosities. There is a large collection of the gorgeous Ottoman rugs, plates, shields, and intricately-wrought battle armor and saddles for horses. There is also a collection of rare Japanese netsuke figurines. Throughout the museum, there are contemporary art installations bringing the collection up to date through political and cultural commentary. The Ottoman exhibit, for example, opens out onto a contemporary video installation revealing the lives of Muslims living in Germany today.

Here are some pictures of the palace and grounds. 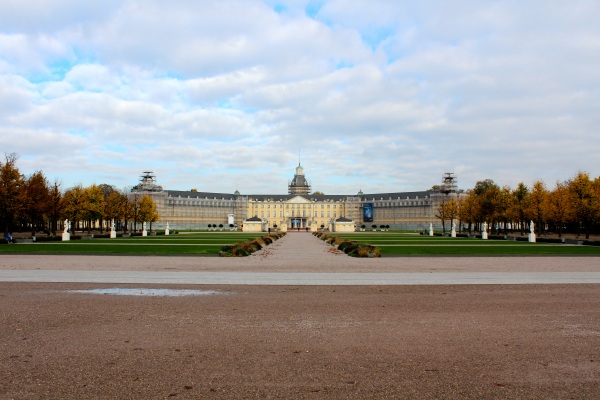 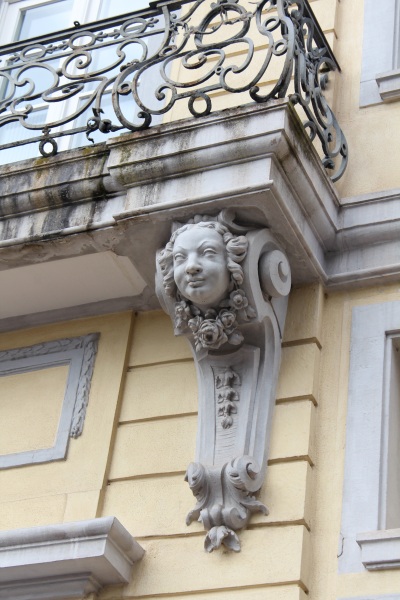 The grounds were so beautiful and expansive, perfect for a walk on a chilly fall morning. 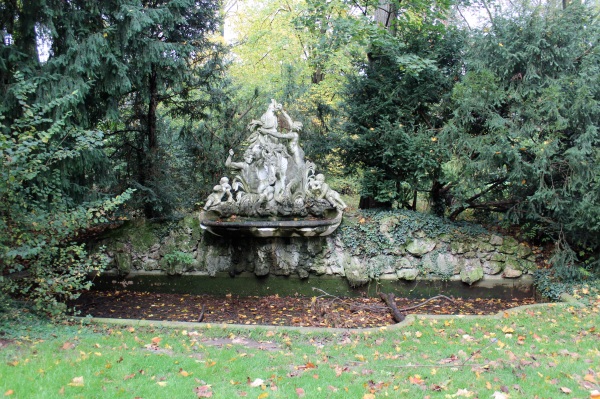 Thankfully the many old trees obviously planted hundreds of years ago on the grounds escaped damage during the war.

Next, we went to the art museum, which has a breathtaking collection of Flemish and Dutch masters. I love how I can walk through most museums here in Europe and one room will have some painting that leaps right out of my college art history textbook an onto the wall.

The Judgement of Paris, by Lucas Cranach the Elder:

And this, one of the best known Trompe L’oeil works in the world, by Samuel van Hoogstraten.

After wandering around the main art museum we went down to what was the palace Orangerie, where the modern art collection is now displayed.

Here we stumbled on something amazing. The museum had acquired a series by the artist Peter Dreher entitled, Die Kleeblume.

The artist made about 80 of these series from the 1970s up until the present day. Each painting in the series represents just a day or moment in time while the whole of the series shows the progression of time and the fleeting nature of a flower blooming, wilting, and then desiccating in the now waterless glass.

I was struck by the overall impact of seeing so many paintings together of one single flower. I was also struck by the different light and shadow qualities, presumably reflecting the changing weather and the fact that the painter worked these at different times of the day. If you have painted from life, you know what a difference a single cloud – or daylight savings, for that matter – can make to a work like this.

I was especially excited to see the work of this artist, because he worked with some of the same ideas I’m tackling in my own bread series, namely, the passage of every day, fleeting but possessing its own temperament, marked out in the slow, meditative ritual of painting.

I am an artist living in Ellicott City, Maryland with my husband and kitty. I am a painter and mixed media artist, but I also work with embroidery and printmaking. I blog about my work, artistic process, and my inspirations. View all posts by Heather Kerley

4 thoughts on “Travelog: German and Dutch Masters and Peter Dreher in Karlsruhe”