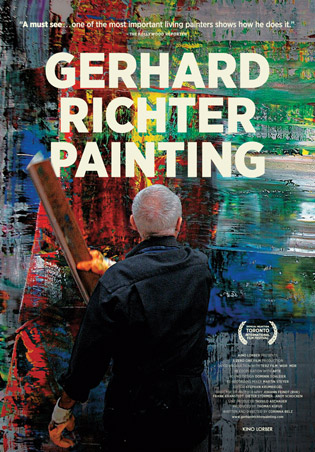 The film “Gerhardt Richter Painting” starts out deadly serious. The artist and his assistants deliberate sternly over his latest abstract works, a series of gray paintings. Richter expresses a measure of surprise at the paintings’ turning toward gray, commenting, “They do what they want.”

The film is not a biography and it does not fully address the scope of the German painter’s oeuvre. It neglects the photorealist paintings he is arguably most well-known for. Instead, the filmmakers spend time in the studio filming the process with which Gerhardt creates his abstract works. These paintings are figurative in the way they mimic metallic or textured surfaces of the modern world. He creates them with layers upon layers of oil paint pulled over the canvas using a squeegee. Sometimes he uses it to apply a layer of fresh paint; sometimes he uses a clean squeegee to remove layers, excavating the sediment underneath.

The filming itself immediately becomes problematic, both for the viewer and for the artist. Profound music is played as the painting’s surfaces are skimmed by the eye of the camera. As the artist works, the soundtrack is punctuated by the sounds of dripping, scraping, slurping, squishing, and the drumming of wide brushes on large canvases as the artist silently works on two square, yellow pieces. After awhile, I found the acoustics embarrassingly self-conscious. The artist eventually steps back and admits that this “working under observation” is a problem.

Watching this, I could not help but remember the cloud surrounding the 1950 Hans Namuth film showing Jackson Pollack splattering paint onto glass. Afterward, Pollack felt like a fraud, having performed the act of painting in a contrived way for the camera. In the Richter film, the artist goes so far as to complain, laughing shyly, that he “walks differently” when he knows the camera is on him.

And therein lies the rub: the difficulty of making a film about the painting process when, arguably, the key decisions leading to the success of an artwork are done privately, when the artist is most engrossed in his or her work. In Richter’s work, it is clear that moment is the result of the alchemical unpredictability inherent to the painting process and the agonizing decisions about what to leave and what to paint over.

I love Richter because he is a great photorealist painter. His approach to photorealism is about the nature of photographic images. Rather than reproducing a photograph’s faithfulness to life, he hones in on those aspects of photographs that are most elusive. Among them, pictures unmoored from their context, news media images blurred by the graininess of newsprint, or photos blurred by the vagaries of photography itself. He reproduces and emphasizes that uncertainty by blending away edges in the paint. His abstractions are not a separate line of work, but an extension of that exploration.

Here are some examples of both:

There are not many painters who can can straddle the divide between abstract and realist painting as well as Richter does. I think this is because Richter carries over his realism into his abstract works, which seem to mirror the world as we know it. I do not see flights of fancy in ribbons of color that emerge on the canvas. Rather, I see the blur of history and its many layers.

“Gerhard Richter Painting” is playing in a number of select cities right now. I saw it at E Street Cinema in Washington, D.C. See the official site for other theaters.